We swam in the Mediterranean yesterday – it was a pretty warm day.  Today there was a chance of rain predicted for the area. We knew we would be driving for several hours but rain wasn’t a big deal… right?

We left Menton, FR later than hoped (when driving in a different country everything takes longer!) and shortly after we left some rain started.  Also shortly after we left, we were in Italy. Interestingly the only way we knew that was a sign at the “border”… there was no stop or any other sign that we were going from one country to another.

As the driver I  did notice that the tunnels (MANY off them) in Italy are better lit than those in France, I also noticed that the lanes on the road were narrower and signage not quite as good. 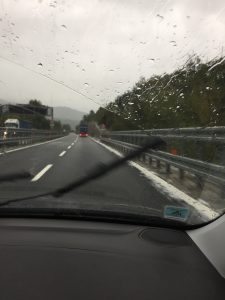 But those were all minor tidbits.  Because then the hail started and the rather violent rain – with a bit of thunder and lightening.  But sill… that’s ok, right?  Sure.  Well… that is, until you find that along the shoulder of the road, the banks on either side and even ON the road in a few places… there is snow… yes SNOW… enough to accumulate and make things white!  The picture G got is after we had passed the larger part of it so you can barely see the snow alon the side of the lane.  But…it wasn’t some thing I expected in Italy in September… the day after we swam in the Mediterranean!!

But, all is well… we drove out of that! Whew!  If you’ve never driven in this part of Italy, well, there’s all sort of things you’ve not experienced!  The road is made up of viaducts (bridges that are VERY high, but seem pretty much like the regular highway) and tunnels (tunnels). After we got past the snow, we got into “vente forte” – if you know music you know part of that means ‘strong’ or ‘with force’… well G figured out pretty quickly that it was “high wind”… yup… high wind, up on VERY high viaducts… and to make it more interesting…no wind in the tunnels and then we’d pop out of a tunnel and be hit with the wind suddenly!  WOW! 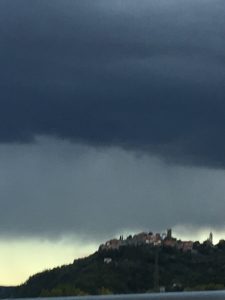 But it was still an amazing journey. The bits of the landscape I could see were amazing.  This is a picture of what seemed to be a small village perched at the very top of a mountain.  It was very distant so the picutre doesn’t really work very well.

I’m sure there will be many more pictures once we see things in the light.

We are in a very remote/rural area here. The last 30 or 40 km were in the dark, raining, and on VERY twisty, narrow roads (for those who might be familiar – most of the road would make the “Cleveland Road” at home seem like somewhat of a racetrack!  LOL  But then we arrived to … oh my goodness… it’s amazing!  But that will wait until tomorrow.