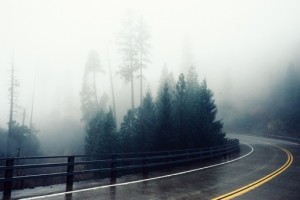 My day started off with rain, lots of fog, heavy traffic and then I realized I forgot my ID tag.  Arghh… what a way to start the day.  Through the day, I was just cranky… for no reason other than the rain, fog, traffic and tag that I left at home.  It put a damper on my whole day and maybe that of those around me.

Just before lunch, I was able to do something in my work that was pretty minor, but I’m told it made someoen else (who I’ve never met) very happy.  That provided some light on what I was, until then, considering a rather gloomy day.

A strange coincidence occured in the later afternoon, which caused me to go “hmm…”, but, I was still feeling the crankyness that had started in the morning with the traffic, the fog, the rain and the darn ID tag at home on the table!  Incidently, the hardships I endoured as a result of the forgotten tag were inperceptable – even to my crankyt self.

On the way home I stopped at a local shop to get some fish for supper.  A young man has been working at that shop since the spring. He’s friendly and we’ve established a friendly rapport over the meat counter.  Ive noted to him that he wraps the meat more meticulouosly than anyone I’ve ever seen.

Today, as he approached, I asked how he was doing.. in the way that we do… you know what I mean?  When we say it rather automatically, without thinking… or meaning.  Yeah, we all do it.  He replied – with meaning. He said, “I’ve been better.”  I thought that was uncharictaristic, as he’s usually pretty quiet.  I had a fleeting moment of thought that amounted to, “Oh, what can of worms have I opened now?” but I kept that to myself.  Instead, I continued, “Oh, why?”  He explained that he had been in an accident on Saturaday, that it was bad, others were fairly severly injured but he was “just shaken up.”

The fact that he was sharing that with me, then, at that time kind of hit home that he needed to talk – even if it was to a virutal stranger.  I listened, there was no one else waiting so I didn’t rush him. The whole conversation was brief, but I could tell he really WAS shaken up, and still is.  He shared some quick thoughts about life that caused me to pause and consider my cranky day, brought on by traffic, fog, rain and my forgotten ID tag.

I thanked him and told him that I was very glad he was there today to help me get what I needed for supper.

How was YOUR day?