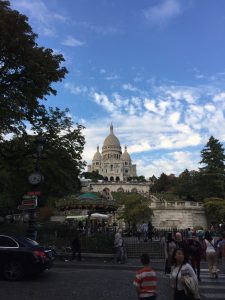 Today we set out on a mini pilgrimage to visit the Basilica of the Sacred Heart.

This magnificent building stands high up on a hill overlooking the entire city of Paris.  Likely the highest spot in the city.

As you can see, the Basilica is enormous and magnificent. It took 46 yearsto build and was built as a memorial to the 58,000 French soldiers killed in the Franco-Prussian War. It was completed in 1923, so by European standards it’s not old… but, as I mentioned it is magnificent and commands an amazing view of the city.

There are many fantastic features in and around the building: a huge, glittering mosaic of Christ, the massive dome, one of the heaviest bells in tthe world in the bell tower, many stained glass windows, and so on.

Priests pray for the souls of the dead here, before the Holy Sacrement, 24 hours a day, every day, for 125 Years. While my level of knowledge stops short of understanding this in it’s entirety, I do understand that it’s a very special action that should be respected regardless of belief.

So… that’s the background.

We took a subway to the nearest stop (still lovin’ the public transit systems!), the walked a bit.  The first thing I found odd was a long stree full of food vendors, junk stores, and similar… all very much oriented for the tourist trade.  (If you’ve been in Niagra Falls, Ontario, there is a street that’s not too unlike this one.) This street was also VERY busy – with obvious tourists – and I’m not suggesting there’s anything wrong with that.  However, it quickly became apparent that this street was eating up the hill toward the base of thhe parks and stairs that lead to the Basillica.  Something felt out of place in this carnivalesque atmosphere.

We continued to the end of the street and crossed to thhe lovely park. Again, quite crowded… people were sitting on the stairs, sitting and laying on the grass, talking, laughing, carrying on.  All lovely… but somehow something was still feeling wrong.

As we climbed the many stairs, and rested at the terraces a couple of times, we noticed sellers, vendors, pedlars … of trinkets, water by the bottle, and beer – yes… beer!

These weren’t passive pedlars, some were somewhat agressive.  Among the many people – and as we climbed up the numbers grew and it was a bit of a challenge to get by in some places –  we were pretty sure there were likely less well-meaning folks in the crowd as well, so we kept close an held our belongings closer… as we drew closer to the church.

We finally reached the top of the gardens and park, and then crossed another street and climbed the stairs to enter the church (after a very brief – as in, non-existant – search of our bags).

As we entered the doors of the church many signs instructed us to be respectful and keep quiet.  I then heard a woman’s voice speaking, in French, over a PA system. 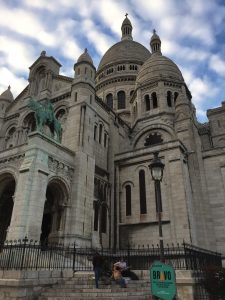 A few more steps revealed that we were not only in the church, but we had walked into the middle of 6:30 pm mass (it was 6:37).  The woman was a lay reader who was just finishing up her reading.  After she sat down a beautiful recorded choir led some responses and then the priest rose to speak.  Just like in any Catholic Church to home except the building washuge, there were 4 traditionally clad Benedictine Sisters on the alter, and there were several hundred people milling about the perimeter of the sanctuary!  The alter and chancel are located so that you can move freely around the rear of them to view the many small chapel niches around the church. As we made our way up the opposite side, and as the priest continued to talk, and the couple of hundred people continued to move around (not very silently) we came to  the gift shop. This shop isn’t outside, downstairs, in the foyer – it’s right off the sanctuary.  Fluorescent lights aglow, money being exchanged for all sorts of touristy crap, and folks laughing and carrying on – as the priest continued to talk.

I was horrified.  Anyone who knows me, knows I’m not a particularly religious person but I do respect those who are and respect their need to worship, pray, praise and be with their individual god in a respectful, peaceful and personal way.

This tourist attraction was none of that.  The whole thing is disrespectful of those who were there to worship and I was angry at the onlookers and spectators – myself included – for being there, but more than that I’m angry at the Church for allowing such a thing to take place. 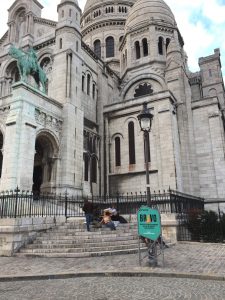 Outside, in a bit of a quiet area, to one side on the steps leading up to the church entrance was a small group of young people. They were quietly talking and singing. The guitar player seemed to be teaching the others a French song. It was a lovely little scene of peace in the horrible circus of events.