Now I lay me down to sleep…

Paris – Home Modern Hotel – this was a nice little hotel in a fairly nice area. It was easy to get to transit and there were some food options nearby.  The building was old, but the interior had been recently redone and was fine. No issues at all.  The outstanding characteristic was the size. The room fit a queen size bed and not a whole lot more. On the upside there were French doors that led to a little balcony that overlooked the street.  So, if one of us was putting on a pull-over and needed some extra room for arms to swing around, the other could step out on the balcony!  I exaggerate of course… or, do I? 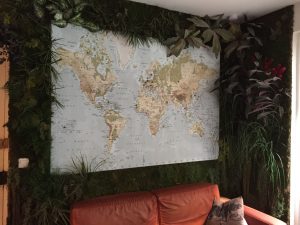 Lyon – our first AirBNB booking.  Well this was a weird little place. Again, the area was fine. We discovered a GREAT grocery store nearby (CarrfourExpress, or maybe a UMarket – both are great places to shop).  This was the only location where we weren’t met by the host/hostess – but that was ok, she was texting with us as we arrived and gave us the instructions to find the key and get in.  It was sort of like an ‘escape room’ in reverse. It was small, ground floor with a back door that went onto a ‘garden’. The entire place was small and would be considered probably a studio apartment – living room area, kitchen, separate, small, bedroom with no door and bathroom. One of the odd things about this place was the wall covered in moss (fake we hope) and fake plants.  Perhaps ‘green walls’ are a good idea in public spaces (and not everyone feels that’s the case) but a fake green wall in a tiny apartment? 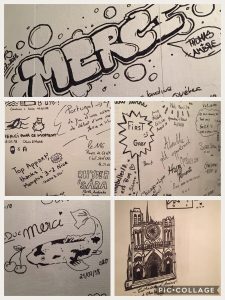 No. This wasn’t a good decorating approach nor was it an hygienic element. The next unusual piece was the bathroom walls. Black markers were provided that allowed folks to express themselves.  This was a MUCH better idea than the green wall.  Surprisingly, the writing was all neat – much of it artistic even – with lovely messages.  Kinda cool. The door had three locks on it… but that’s really not too unusual in cities… the back door had only one.. oh well.  The bed was comfortable enough, but the two smal, square pillows were about equal to a pancake in support and comfort. But, hey… for a couple of nights that’s ok! Unfortunately, the oother negative thing about this place was that it wasn’t as clean as it should be. Primary surfaces (bed, kitchen counter, bathroom counter, toilet and tub) were fine, but other areas… hmm… not so much.  🙁 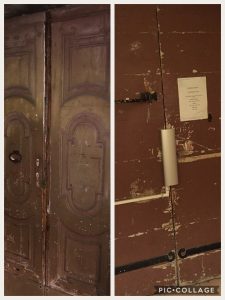 Menton – another AirBNB selection.  The location couldnt have been much more convenient!  It was right in the heart of the ‘downtown’ area with lots of sopping, eating and walking available – and the bonus was that it’s about 300 feet from the beach!  The lovely hostess met us and ensured we were situated. This apartment was on the second floor and down a hallway.  It was small – tiny even.  In the living room a sofa opened into a bed, a closet included additional pillows, ironing board, etc. This space opened into the kitchen, which was adequate for our purposes and contained a tiny folding table. The whole place was clean but there was a smell which, fortunately I smelled only as we were leaving, but G smelled for the entire time.  Below is a pano picture of the whole apartment (I’m standing in front of the sofa/bed so you can’t see it). The other interesting thing about this place was the front door that led to the street.  It looked ancient, but. The lock was a pretty modern, magnetic lock that used a fob as a key! Quite the juxtaposition of old an new!

Antognano (Tuscany) – The Villa – This amazing place, and the people we met there will be a post on its own.  There is far to much to share! 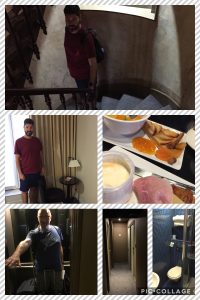 Paris – Gardette Park Hotel – This was at some point… something else.  Perhaps an accomodation of some sort, a flop house, a hostel… but it’s been renovated and is now a chic, boutique hotel (whatever that means). Regardless of what it was, it’s a nice LITTLE hotel now.  You’ll see some examples in the picture. The ‘desk and chair’ would fit well in a lower elementary classroom, the very nice and well appointed bathroom was one of the smallest I’ve seen, the elevator was literally a squeeze for me and two suitcases – but, there was a nice breakfast buffet included – and not only was there apple pie in the buffet (indicating that it IS fine to have pie for breakfast), since it was a buffet, a person could have two pieces!