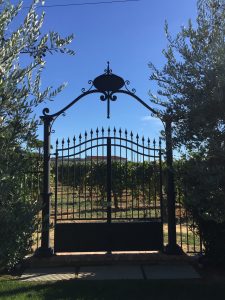 (Note: Featured photo and photo to the left by G)

We set off this morning too drive to the coast. We were headed for a winery and coastal town that were suggested by our host, Francesca.

As we neared the winery we realized we’d be there during their closed time (1 – 2:30 pm) so continued to Lerici.  This is a small coastal town in Liguria Region (Italian Riviera) with a population of about 10,000. It is perched on the side of a hill/mountain which extended almost to the ocean (like Puerto Vallarta that way).

Driving in the town is stressful so we parked as soon as we found a spot and walked 10 minutes tothe waterfront.  It was lunch time so we stopped at the first restaurant we found and had a light lunch. Both servers had quite workable English and both were very nice.

We then strolled along the waterfront and took some pictures that you’ll see in the gallery below, then back to the car.

We drove 15 minutes outside of town to the outskirts of Sarzana to Ca’ Lunae Winery.

However, this is more than a winery! The establishment is built around and in an eighteenth century complex and uses that backdrop perfectly to house winery, tasting rooms, development labs, museum, distillery, event area, kitchens, vineyards, jam and jelly production facilities, store nd gardens.  All of this is presented beautifully and tastefully.  The development acknowledges the past and embraces the future.

We had a very nice time with a great staff member who spent a good deal of time while we tasted many wines (G actually, I took sips of his), olive oils, jams, and jellies. There was no rush, there was no limit, there was no charge!

While we were there a group (two couples) arrived from Ontario (“just outside of Toronto”) they were sharing tales with the Italian winery staff of the great Ontario wine region called “Niagara”. They also pointed out that Canada has a second wine region in British Columbia “Okanagan” (they totally ignored Ontario’s Prince Edward County Region!).

I “had” to jump in and remind my Canadian brothers and sisters that Nova Scotia has a thriving wine industry!

But… back to this fantastic establishment.  The gardens are great, the entire place is very open and welcoming and the wine (primarily white) was fantastic as was the olive oil!

Our drive back was a bit more of an adventure than expected.  You see, as I’ve pointed out in a previous post, we are relying on Google Maps.  GM has been serving us VERYwell – that coupled with the Nav system in the car (TomTom), which tells us all kinds of great things about what’s coming up on the road ahead, has been great. On the way to Lerici, we spent about a third of the trip on highway or higher grade of road. We expected the same return route.  However, GM had other plans. 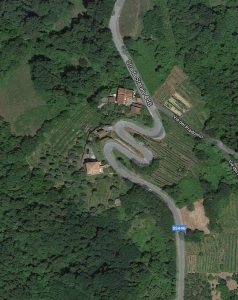 Perhaps it was a level-up for me as the driver – I hadn’t been aware I was gaming with GM though.  GM brought us UP, and UP and UP… a very steep mountain, on VERY, VERY narrow roads that were far more twisty than those we had previously been on in Italy. At one point I’m quite sure we were on the equivalent of the PEI farmers track that we landed on one summer… in this case I think it was a private driveway or road… finally, we descended down the other side of the mountain. [Note: the picture here is part of the drive back.  Note the FOUR hairpin turns in very close succession, AND these in on a very steep decline! As we were coming out of the 4th, two older ladies crossed the street in front of us with baskets to go pick grapes. You can ALMOST see them! You can see their house and their vineyard.]

Of course we still had to climb the mountain on which our lodgings exist!

A stop at the local pizza place provided an excellent supper (2 medium pizzas and 2 large bottles of beer for 20 Euro ($30)) then off to our wonderful home for the week to eat and de stress from the twisty road!