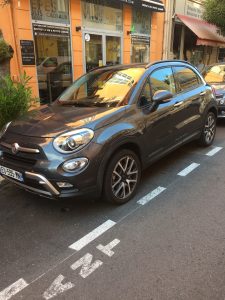 Yesterday we went to pick up our car and encountered complications.

We were VERY fortunate to have an amazing person helping us. She had very good English and an excellent sense of what customer service is about.  She was also fun to deal with in what, at times, was a frustrating situation.  She gave us an Italian car because she said the Italians don’t like French cars and having an Italian one would serve us better there.

In the end things worked out and we set out on the journey to the south of France – about 5 hours.

The car is a standard/manual transmission.  I haven’t driven a stick in MANY years, but that bit came back pretty quickly.

Driving on strange roads in France isn’t much different from driving on strange roads anywhere.  We have noted that highway driving and city driving are quite different.  In the city there is always at least one lane (maybe more) that you aren’t aware of – that’s the lane that is invisible, about 6” wide and which all manner of motorized two-wheel things use.  There seems to be no laws at all regarding where or how motorcycles, scooters and the like can move. Further to that… if you don’t read their mind and know what insane movement they are about to make, they get quite peeved at you!

But, back to the highway… max speed was 130 kmh. Highways are in excellent condition and traffic moves along well.  Usually three lanes – the outermost lane seems to be for trucks, so we avoided that and stayed mostly in the center lane.  No one seemed too upset with that, I I guess it was the right thing to do.

The highway had tolls… several… and they aren’t cheap… but as I said, the roads are in excellent condition so… hard to complain.

The combination of driving a standard, doing mostly 130 kmh, seeing (or partly seeing) some extraordinarily beautiful landscape and being in a totallly new situation created quite a significant adrenaline rush so when we finally got settled last night, and I came down from that it was a bit of a crash – so I got pretty tired pretty fast.

Having a car in Europe – at least this part – is a much different experience than having one at home. It adds a new dimension of complexity to everything. This part of the world is not designed for everyone to have a car – there is amazing public transit – so adding more cars to the mix just makes things more complicated.

Next leg – tomorrow is a 4 hr drive in Italy.  Can’t stop along the way for a glass of wine – DANG!